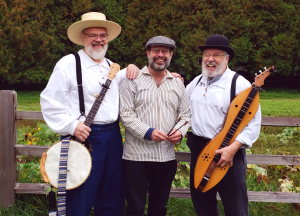 These long-time musician friends have come together to perform a range of folk music inspired by American Old-Time and Celtic traditions. The combination of mountain dulcimer, hammered dulcimer, banjo, and guitar especially lend themselves to the music of late 19th Century America. The mountain dulcimer, especially, is an instrument developed by European immigrants to the Appalachian region.

After several months in the studio, hours of mixing and mastering – Norm completed his project, a wayfarer… songs of hope and encouragement … 15+ songs that have been meaningful to Norm… and now he can share them with you.
​
Norm says, “I can say this has been a most rewarding and humbling experience. So many people have been encouraging and supportive. My family has been awesome and the folks who contributed on GoFundMe have been awesome in making this happen.”